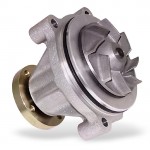 The water pump is the heart of the cooling system. The pump circulates coolant between the engine and radiator to keep the engine from overheating. Inside the pump is a metal or plastic impeller with blades that push the water through the pump. The typical problems with water pumps are the shaft seal leaks, the bearing wears out, or the impeller comes loose on the shaft. When the impeller slips (mostly pumps with plastic impellers) coolant is not pushed through the system and overheating will occur. Severe corrosion can eat away at the impeller fins as well reducing the pump efficiency.

The engine belt drives the engine accessories such as the air conditioner, the power steering pump, water pump, etc. The belt has to endure extreme conditions such as heat, friction, and heavy loads. At times the belts can get glazed or worn and can begin to make noise. Belts need to be changed on a regular interval. If you have 60 to 80K on your vehicle, you should have your belts inspected for cracks and wear. 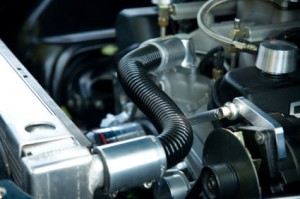 Cooling system hoses are critical components of the cooling system. They may appear to be just fine, but they deteriorate from the inside out. At times squeezing the hoses can help determine if they need to be replaced. If they feel crunchy they are to the point they may burst at any time. Often there are as many as ten or more cooling system hoses, some from the heater system, the radiator, and others that cool various components of the engine. They are often hard to see, and tend to get neglected. Never attempt to continue driving once you see steam coming from under the hood. Typically when a hose bursts, you have a very short time to shut the engine off before serious engine damage is done.

At Automotive Artistry, each time you come in for an oil change, we check the belts and hoses for you. That way you can be apprised of any needed services and you can plan for them.